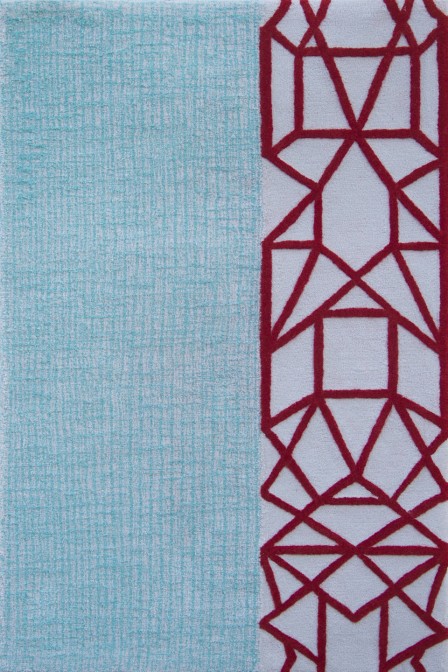 Ceadogán Rugs is renowned for its contemporary gun tufted rugs and wall hangings. Run by husband and wife team Denis Kenny and Fiona Gilboy, this Irish company is delighted to support emerging Irish design talent and has always been associated with the best in Irish design and over the years we have worked with many of Irelands leading textile designers… Stephanie Conroy, Terry Dunne, Maree Hensey, Orla Kelly, Patricia Murphy, Sheila Naughton, Liz Nilsson, Brigitta Varadi, and has had a very long association with Mainie Jellett.

Over the past twelve months Ceadogán and the NCAD have worked together producing a module with third year students with Ceadogán designer, Maree Hensey during which time she guided them through the many processes involved in the design and manufacture of a hand-made Ceadogán rug. At the end of the module each student was invited to submit a rug design. From the large body of work that was presented the design of one student, Katie Hession, was selected and made into a rug. Kate’s rug, entitled ‘Suaimhneas’, will be shown at the Antiques Fair in the RDS (September 26th – 29th) and again at the Ceadogán Rugs Exhibition at the Opera Festival in Wexford (October 23rd – Nov 3rd.).

“Suaimhneas” seeks to fuse together urban texture and geometric architecture, with the juxtaposing tranquility of rural life. Initial inspiration was drawn from abstracted photographs of city surfaces, and linear perspective drawings of buildings. The creative focus turned to origami and the structural patterns within paper-folds. Bold fiery red angular lines contrast with the organic textures at the left; Suaimhneas seeks to create a fusion between the urban and the rural.

Katie Hession is a final year Textile Design Student at the National College of Art and Design, Dublin.
Her interests lie especially in the areas of textile surface design, and she seeks to create innovative and contemporary new fabrics and surfaces. She is inspired by the contrast between modern architecture and geometric shapes, juxtaposed with the fluidity of natural and organic forms, such as the body and nature. Katie’s work fuses modern design techniques such as Adobe Photoshop and Illustrator with traditional method such as painting and sketching.
Katie’s work has been displayed in the Royal Hibernian Academy, The Knit and Stitch show in the RDS, as well as being featured on RTE’s The Late Late Show, national television show. Katie also features annually as a main contributor to the Adare Young Artists’ exhibition, in Limerick.
Katie has worked for high-profile fashion designer Mary Katrantzou in 2012, and bespoke textile designer and artist Anne Kyyro Quinn in 2013. Through this she has enhanced and developed her own personal style as well as expanding upon her technical skills repertoire.